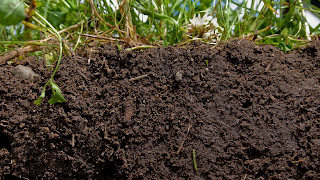 According to this article from Quanta Magazine... "a new generation of soil studies powered by modern microscopes and imaging technologies has revealed that whatever humus is, it is not the long-lasting substance scientists believed it to be. 'There are a lot of people who are interested in sequestration who haven’t caught up yet,' said Margaret Torn, a soil scientist at Lawrence Berkeley National Laboratory."

A lesson from General Motors vs Ford

A business marketing story to help us think about the challenge of attracting certain parts of the market for our new e-com store, is Alfred Sloan's classic, "My Years at General Motors."

Until the 1920’s Henry Ford dominated the automobile market with his factory produced cars and low price. He could build cars cheaper than his competitors and he dominated the market based on price by building just one model: The Model T. Car buyers back then saw the automobile as just a form of transportation, nothing more. Cars as a commodity. So they were happy to own Ford Model T.

GM challenged this paradigm and grew to be one of the dominant automobile makers in the world. How did they do this? One of their weapons was through product segmentation and in understanding their market. They changed the public’s perception of the automobile from just a means of getting around to being a symbol of status and luxury. They created several models, from the low priced Chevrolet to the high priced Cadillac, each targeted to a different market segment. Thanks in part to their product and marketing strategy GM eventually surpassed Ford Motor Company.

This is not a perfect comparison, but to look at garlic in context of Ford vs General Motors gives a sense of the challenge. For us, the equivalent of Ford is cheap imported garlic. Many consumers see garlic as a commodity, sure it’s a desirable flavour in their food, but it’s seen as one dimensional, sharp and strong. They wouldn’t consider paying more than $2 or $3 per pound. They were like the early buyers of the Model T. Our challenge is the same challenge that General Motors had over 100 years ago: How to make Ontario garlic and the products made with it, attractive to the segment of the population that sees garlic as a commodity, an essential ingredient maybe, but not worth more than the price paid for imported garlic.

Crisis in the seed tray!

A morning glory seedling seems to have broken its stem. Its hanging on by a thread. Still getting nutrients, the young leaf is doing ok. But if this little guy is gonna survive I'll have to make a splint. 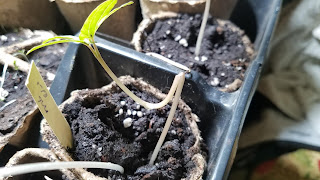 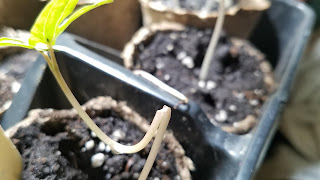 Peter McClusky
Before spending 2010 working full time as an intern at Whole Circle Farm I lived in Brooklyn NY and for 11 years was VP, Global Distribution at a digital media company in Manhattan(www.Photolibrary.com - which was merged with a bigger company soon after I left). I've been a board member of the Aberfoyle Farmers' Market since 2010, and was the market manager during the first year of the market. Since 2009 I've been growing heirloom garlic – around 5,000 plants - near Acton, Ontario. I'm the founder/manager of the Annual Toronto Garlic Festival, and consultant with the Greenbelt Farmers’ Market Network. My Book, Ontario Garlic: The Story from Farm to Festival (Arcadia Press) is available online.